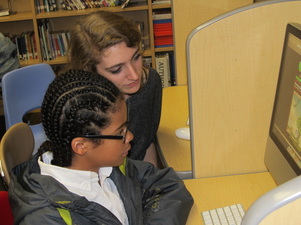 The BLP partnered with The Timilty Middle School in Roxbury, where there previously was not a library, and donated 800-1,000 books to establish one.The Brookline Literacy Partnership (BLP) was founded in 2008 by then-Brookline High School student Sarah Plovnick and a small group of committed students as an outgrowth of a community service day at Temple Ohabei Shalom.  The BLP partnered with the Ralph Waldo Emerson school in Roxbury, which had no school library, lacked literacy resources, and had many English language learner (ELL) students from Cape Verde.  Quickly, the student-led organization based at Brookline High School began to raise money and collect books for the Emerson School.

While at the Emerson, the BLP collected over 4,000 books for the school and classroom libraries and organized these books into a checking-out system.  In March of 2010, they staged the first annual IntelliJam world music benefit concert, raising over $10,000.  The following year, the BLP expanded its work at Emerson, founding the Tutoring and Vacation Books programs and gaining many new members.  The Tutoring program brought 15 Brookline High students to the Emerson each week to work one-on-one with students struggling with reading while the Vacation Books project sent each student at Emerson home with a book of their choice just before February vacation.  The BLP also established an adult advisory board in Fall 2010 to help facilitate partnerships with businesses in the Brookline community.  In May 2011, the BLP put on the second annual IntelliJam, which was held at Temple Ohabei Shalom and raised nearly $10,000.  Unfortunately, due to budget cuts, the Emerson School was closed following the 2010-2011 school year, and the Brookline Literacy Partnership had to say goodbye and search for a new school.

After a summer of investigation, the BLP decided to partner with the Mather School in Dorchester, the nation’s first public elementary school. The Mather School is a diverse K-5 school with over 600 students, including a large Vietnamese population.  The BLP again added many new student members, and partnered with other organizations, schools, and businesses throughout Brookline.  Since then, the BLP has continued its three signature projects (Building Library Collections, the Tutoring Program, and the Vacation Books program) at the Mather School.

In 2017, the BLP began another major program at the High Street Veterans complex of Brookline Public Housing serving low-income Brookline residents. Since the inception of the After School program at High Street high school students have tutored three times a week. We are working with Brookline Housing Authority employees to ensure the maximum benefit of the students and continue to extend support through financial aid, community activities, and tutoring.
Proudly powered by Weebly